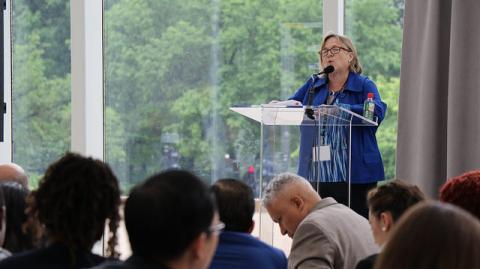 More than just a pest, mosquitoes are the world’s most dangerous animal.

Despite their diminutive size, mosquitoes spread deadly diseases that affect more than half of the world’s population and lead to billions of dollars in economic losses each year. From endemic malaria to outbreaks of yellow fever, chikungunya, dengue and Zika, mosquitoes require a global response. Health communication must be a part of that response.

To that end, nearly 100 international experts came together for Mission Mosquito, a global health security and public communication forum hosted by the U.S. Department of State on May 17, which sought to address how innovative health communication approaches and partnerships can help improve responses to mosquito-borne diseases. They shared experiences and strategies during the daylong event, which was held at the U.S. Institute of Peace in Washington, DC. Among the speakers was Alice Payne Merritt, deputy director of the Johns Hopkins Center for Communication Programs.

Attendees were welcomed by Ambassador Judith Garber, principal deputy assistant secretary in the Bureau of Oceans and International Environmental and Scientific Affairs at the State Department, who outlined the critical role that health communication plays in efforts to control mosquito-borne diseases. “We need to help people understand risk; change their habits, behaviors, and beliefs, and trust science-based advice,” she said. “Without strategies that engage communities, our efforts will fall flat. We must use voices that communities trust to provide accurate, timely, and actionable information.”

With disease-causing mosquitoes expanding into new areas, governments need to look to new partners, strategies and techniques to both inform and inspire action. She concluded by asking, “How do we make the threat of mosquito-borne disease everyone’s mosquito mission?”

Adriana Costero-Saint Denis, vector biology program officer at the National Institute of Allergy and Infectious Diseases, gave an overview of the relationship between mosquitoes and humans, which has been millions of years in the making.

Current mosquito control approaches, she said, focus on reducing vector populations, preventing contact with mosquitoes through the use of repellents and barriers such as bed nets and blocking the development of pathogens so they cannot be transmitted.

In addition to recent developments in vector control, she said, “community engagement is essential for any approach to be successful.”

CCP’s Merritt spoke about social and behavior change communication and shared examples from her work with Zika and malaria efforts around the world. Merritt says decision-making is difficult because human senses generate more information than people can mindfully and rationally process. As a result, our brain takes short cuts, recognizes patterns, uses stored experiences and uses emotional reactions to cue decisions that are most likely to be correct or functionally useful. In fact, many decisions we make each day are automatic.

“There is no magic bullet to changing behaviors, but we can draw on tools and best practices,” she said. These include following a strategic methodology, knowing your audience, harmonizing messages, coordinating closely, using multiple channels and relying on data.

Merritt spoke about the Zika Prevention Behavior Matrix, an example of harmonizing messages and coordinating with partners. The matrix was developed by the Breakthrough ACTION + RESEARCH projects, with funding from USAID, to help address the overload of Zika messages in Latin America and the Caribbean. CCP leads Breakthrough ACTION.

From changing human behavior, the conversation shifted to technological advances in mosquito control. Toni Panaou, a digital epidemiology researcher at the University of South Florida, demonstrated how drones with specialized sensors can be used to detect mosquito habitats in real time. Jack Bobo, vice president of global policy and government affairs for Intrexon Corporation, discussed how his company is using genetics to control mosquitoes. “We need to prepare for the next crisis instead of the last one,” he said when describing how mosquitoes can be made sterile through gene manipulation.

Mike Lawrence, director for exhibitions at the Smithsonian, discussed Outbreak: Epidemics in a Connected World, the newest exhibit at the Smithsonian National Museum of Natural History in Washington, DC, which coincides with the 100th anniversary of the influenza epidemic of 1918 that killed three to five percent of the world’s population.

To better reach people around the world, the Smithsonian has also created a pop-up exhibit, which distills the information into 18 panels. The panels can be downloaded and printed at no cost and 40 partners have already expressed interest. 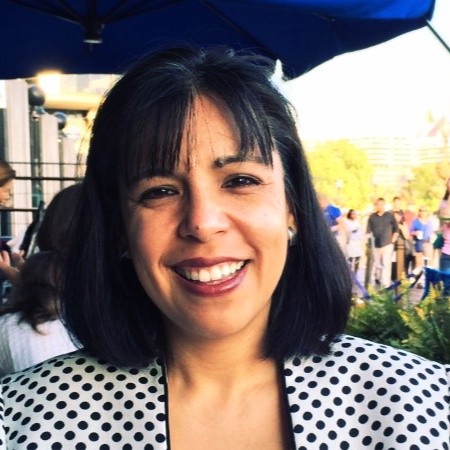 Marcela has extensive experience in delivering presentations for national and international conferences and is featured in publications such as Family & Community Health: The Journal of Health Promotion & Maintenance and Archives of Ophthalmology.

Fluent in English and Spanish, she has worked on short and long-term assignments in 16 countries.