Taking Aim at Zika (and Other Mosquito-Borne Illnesses) 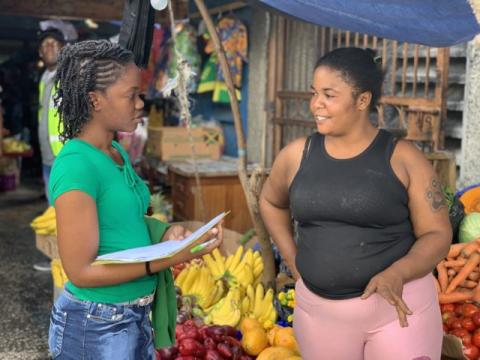 When the Zika outbreak was in full swing in 2015 and 2016, a panic set in. Zika, which had been virtually unknown before, was being linked to birth defects in babies born to mothers who were infected by mosquitoes carrying the virus. Organizations around the world, including the Johns Hopkins Center for Communication Programs, set out to develop ways to prevent its spread and keep people – especially pregnant women – safe from Zika.

It’s a different climate now but over the past six months, CCP’s Breakthrough ACTION project has been working in five Central American and Caribbean nations to train upwards of 500 people in interpersonal communication skills for those who go door-to-door to help people prevent Zika – and other illnesses carried by the Aedes aegypti mosquito, such as dengue, chikungunya and yellow fever. In an additional four Caribbean countries, the project has also led trainings in how to use social and behavior change approaches to deliver the messages far and wide.

The main issue everyone is encountering, more than two years after WHO announced that Zika was no longer a public health emergency: Many people no longer see it as a threat.

Still, many of the recommended prevention behaviors are just as relevant for avoiding the spread of other mosquito-borne illnesses such as chikungunya and dengue in the region, says CCP’s Gabrielle Hunter. By wearing mosquito repellant, removing standing water in the yard and cleaning water storage containers, people can protect themselves against diseases beyond Zika. And the interpersonal communication skills learned can be applied to a future emergency outbreak situation – even for a disease that has yet to emerge.

“It’s been an uphill battle to keep Zika on the radar,” says Hunter, who is leading many of the efforts for CCP. “But the work has increased the knowledge of Zika and other viruses carried by the Aedes aegypti mosquito and it has increased the capacity of the region to respond to future outbreaks, especially those carried by the same mosquito. Because of this, the demand for our trainings and the need for these skills has been great.”

Before Zika hit the Americas, countries had some experience working to defeat dengue, which can be a far bigger health threat to adults and children. But the list of recommended prevention behaviors was large and diffuse. One review of USAID-program Zika materials counted upwards of 30 behaviors, far too many to have an impact.

To develop a more manageable list for Zika, Breakthrough ACTION worked with Breakthrough RESEARCH, which conducted a literature review and worked to distill the key elements that are important for prevention behaviors to be effective. Breakthrough ACTION facilitated a dialogue with USAID’s other Zika partners to come to a consensus. Eventually they whittled the list down to seven behaviors, several of which can also prevent other mosquito-borne illnesses.

Breakthrough ACTION and RESEARCH have also developed an online guide that helps users explore these behaviors with the greatest potential to prevent transmission of the Zika virus.

Lessons learned from behavioral science, marketing and adult learning have demonstrated that individuals need to hear a message multiple times before they are compelled to take action. It is therefore crucial for partners working in SBC for Zika prevention to promote a harmonized set of behaviors, to “speak with one voice” to increase the chances that families at risk are doing what they can to prevent mosquito-borne illnesses.

“Our trainings have really focused on skills for household visits to talk about Zika: this is how to better deliver the messages to motivate families to change their behaviors and here is how to deal with common myths and misperceptions they may have,” Hunter says. “We think there’s a big interest in this work because they see these skills as cross-cutting, relevant not just for mosquito-borne illnesses but other health areas.”

How NPR reported on the coronavirus when it was first named a ...NPR
Chevy Chase Trust Holdings LLC sells 3,453 Moderna, Inc. shares.Best Stocks
These 9 viruses have pandemic potential, says WHO : Goats and SodaNPR
The deadliest and most dangerous animals on Earth in pictures ...9News
Caribbean Countries Confront Zika Outbreaks in 2023Zika News