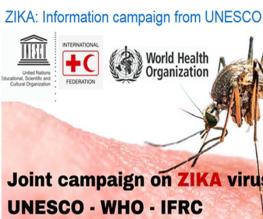 The power of radio, its proximity to the population and its ease of access, provide a unique opportunity to reach the largest number of people in the shortest possible time to effectively disseminate prevention messages during sanitary crises and epidemics.

Three information and prevention radio spots against the spread of the Zika virus were produced by UNESCO in collaboration with the International Federation of Red Cross and Red Crescent Societies (IFRC) and the World Health Organization (WHO) in the four major languages of the region: English, French, Portuguese, and Spanish.

Leading international broadcasting networks and organizations - such as the International Association of Broadcasters (AIR-IAB), the Caribbean Broadcasters Union (CBU), Radio France Internationale (RFI) and the World Association of Community Broadcasters (AMARC) among others - have advertised, distributed and broadcasted the spots. Every UNESCO Member States’ National Commission from the Latin American and Caribbean region was also involved, namely 36 countries. In total, the campaign reached nearly 20,000 radio stations throughout the whole American continent.

How NPR reported on the coronavirus when it was first named a ...NPR
Chevy Chase Trust Holdings LLC sells 3,453 Moderna, Inc. shares.Best Stocks
These 9 viruses have pandemic potential, says WHO : Goats and SodaNPR
The deadliest and most dangerous animals on Earth in pictures ...9News
Caribbean Countries Confront Zika Outbreaks in 2023Zika News